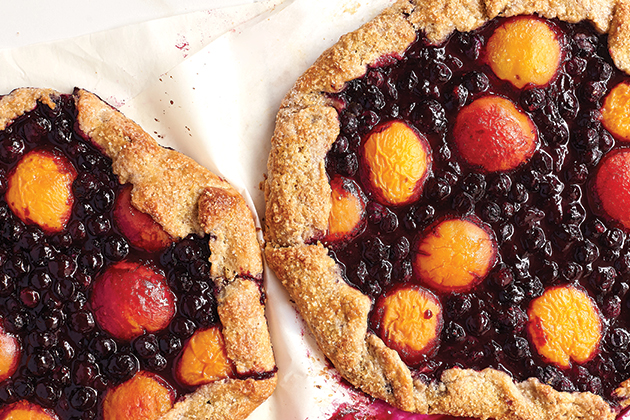 Make the crust: In a large mixing bowl, whisk the flours, Stevia In The Raw®, Sugar In The Raw Organic White® and salt. Using a box grater, grate the frozen butter over the mixture. Gently rub the butter into the flour to incorporate. Set aside.

Line two large rimmed baking sheets with parchment paper. Lightly flour a work surface and a rolling pin. Roll out the discs of dough, applying even pressure with the rolling pin, into two, 14” circles. Transfer the dough to the prepared baking sheets and set aside. If not preparing the filling immediately, keep the dough chilled in the refrigerator.

Make the filling: In a large mixing bowl, combine the apricot halves and blueberries and toss to coat with ¼ cup of Stevia In The Raw®, ¼ of Sugar In The Raw® Organic White, lemon zest, flour, and lemon juice.

Arrange the fruit mixture over the two crusts, leaving a 2” border around the edges. Fold the edges of the dough up and over the fruit, pressing firmly to seal the folds. Chill the galettes in the refrigerator until the rim of the dough is firm, about 15 minutes.

Preheat oven to 400° F. Remove the galettes from refrigerator and brush the edges of the crust with the egg wash and sprinkle with Stevia In The Raw® and Sugar In The Raw®.

Bake until the pastries are deep golden brown and the juices are bubbling throughout, about 30 to 40 minutes. Allow to cool slightly, at least 10 minutes. Serve warm or at room temperature.