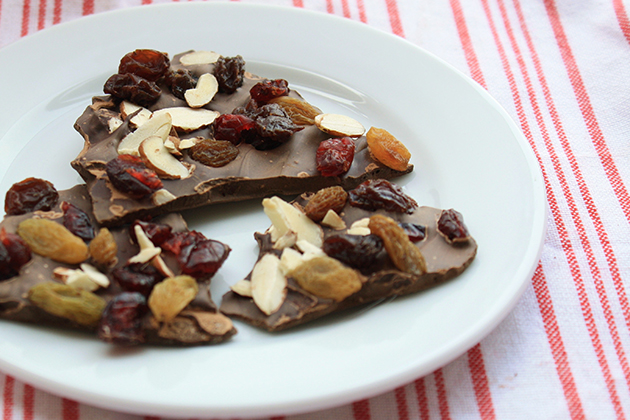 Line a baking sheet with baking parchment. In a bowl, combine the almonds, cranberries, and raisins.

Using a metal or a flexible spatula, spread the Monk Fruit In The Raw™ -sweetened tempered chocolate in a roughly 8-inch x 12-inch x 1/4-inch layer on the prepared baking sheet, smoothing to even it. Sprinkle the dried fruits and nuts evenly over the chocolate. Set the Bark aside until the chocolate sets firmly, 2-3 hours.

Gently lift the bark off the baking sheet, using your fingers to break it into pieces of varying size. Place the pieces of Bark in an airtight container, or a decorative gift box, using wax paper to separate layers.

Chocolate bark can be made with melted chocolate that is not tempered. To harden, chill the bark until the chocolate is firm, and serve it directly from the refrigerator. The chocolate may look cloudy or streaky and will melt quickly in your fingers, but the bark will taste as good as when made using tempered chocolate.

To make candy bars, pour the tempered chocolate into plastic molds, then press dried fruits and nuts into the exposed surface of what would normally become the bottom of the bar when it is unmolded.