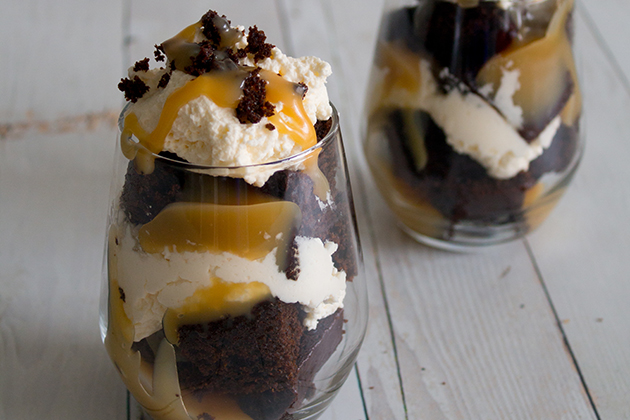 Preheat oven to 350℉. Lightly grease a 9” square baking pan. With a stand or hand mixer beat butter with Sugar In The Raw and Stevia In The Raw until creamy. Beat in molasses and egg. Beat in flour, baking soda, ginger, cinnamon, and salt on low speed. Then mix in water on low speed, scraping down sides of bowl as needed. Pour mixture into prepared pan. Bake 35-40 minutes or until toothpick inserted comes out clean. Cool completely and then cut into 1” cubes.

To make butterscotch, melt butter in a small saucepan over medium heat. Add brown sugar, Stevia In The Raw, cream, and salt and whisk until combined. Bring to a gentle boil and cook for 5 minutes, whisking occasionally. Remove from heat and stir in vanilla. Cool to room temperature.

In a large bowl beat cream, Sugar In The Raw and Stevia In The Raw on high speed until stiff peaks form – about 1 minute. Keep whipped cream cold until ready to assemble trifle.