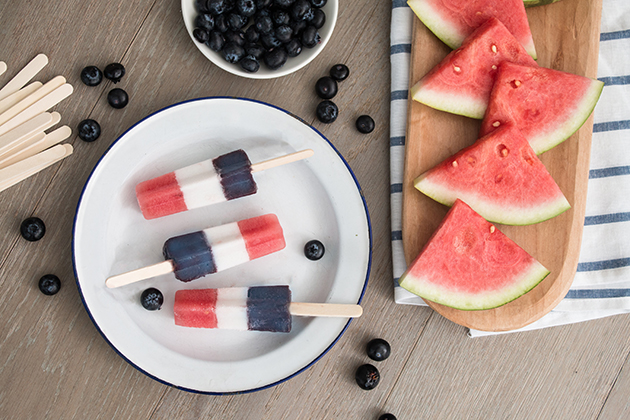 In food processor or blender puree watermelon with 2 teaspoons of Stevia In The Raw® and divide between popsicle molds, letting mixture come ⅓ of the way up the molds. Place in freezer and freeze solid, about 1½ hours.

Stir 1 tablespoon of Stevia In The Raw® into coconut milk and pour over frozen watermelon mixture in popsicle molds, allowing the mixture to come ⅔ of the way up the molds. Place popsicle mold cover on top and insert popsicle sticks. Freeze until firm, about 1½ hours.

Puree blueberries with 2 teaspoons of Stevia In The Raw®, and strain through a fine mesh strainer. Divide mixture between popsicle molds, filling them to the top. Freeze until firm, about 2 hours more.

To remove popsicles from molds, submerge the mold in lukewarm water for several seconds until the pops easily pull out.