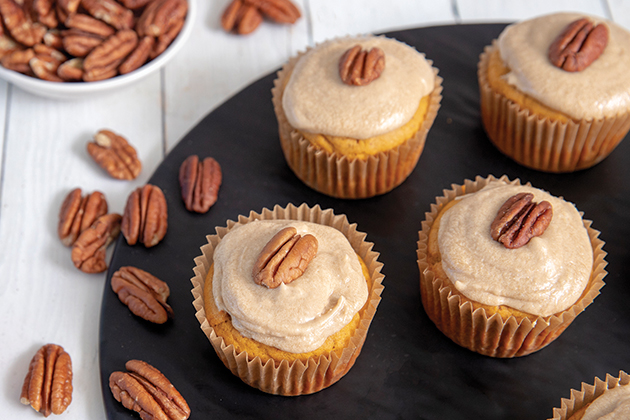 In a medium bowl, whisk together flour, baking powder, cinnamon, ginger, baking soda, salt, and cloves. In a large bowl or the bowl of a stand mixer fitted with the paddle attachment beat butter with Stevia In The Raw® and sugar until fluffy, 3-4 minutes. Add eggs 1 at a time, scraping down bowl and beaters after each addition. Beat in vanilla. Beat in ⅓ of flour mixture, then sweet potato puree, then another ⅓ flour mixture, then sour cream, then remaining flour mixture just until combined.

For frosting, in a large bowl or the bowl of a stand mixer fitted with the paddle attachment, beat sugar, Stevia In The Raw® and butter until smooth and creamy. Add enough milk to reach a smooth, spreadable (but not runny) consistency. Beat in maple extract. If frosting is too loose, refrigerate, covered, until spreadable.

Use a small offset spatula to frost cupcakes. If desired, top each cupcake with a pecan.